Have you ever arrived in a city and felt lost? We think so.

You can count only on your sparkling smartphone with its bright and useful Maps to help you.

It leads you through the streets and wynds of the Eternal City: it can surely indicates you the nearest bar, the right tube line to take (not much to chose in Rome anyway) or the cheapest gas station.

But at the end of the day, is being a reckless and solitary tourist counting only on the technology the best way to experience a millennial city like Rome? We don’t think so and here we are proving it to you with a Top 5 list of the hidden and so curious and therefor interesting historical inscriptions in Rome, something only a Roman would know.

These are words written on marble that recollects us of a everyday life that belongs to millenniums ago, when there was no glue for boards, but only the chisel. Among the many hidden inscriptions spread all over the city, off the list of those we prefer the most.

Are you wondering about all the others? Wouldn’t it be funny to hunt yourself for them? 🙂

Inscriptions by the President of the Street

Ok, that was -quite- a joke but you caught my drift. Surely at that time the Romans didn’t treat the city as it deserved and the illustrious President of the Street, a functionary of the Roman Curia had to write several inscriptions spread all over downtown to forbid the people to leave their trash at their convenience on the corners of the streets or in front of the churches, turning the city to a big trashcan.

Reading it now, in 2017, it makes us laugh: a president of the street, really?

Then it’s written in Roman dialect and it sounds to us more like a cheap stand up comedy piece… but at that time they must have taken it pretty seriously, since they risked some serious corporal punishment!

Via Margutta 110: Fellini, an inscription that looks like a closed circle

Long before he became a worldwide movie director, Federico Fellini was a young man who moved from Rimini to Rome during the German occupation of the Eternal City, 1943, looking for a job as a sketcher.

One day he was wandering about in Piazza Di Spagna when a German truck burst into the square and the soldiers arrested everyone they could; Fellini included.

How so? He saw a German officer walking on his own along the sidewalk and greeted him pretending they were friends. The German was pretty confused but greeted him back, so Fellini jumped off the truck and hug him as an old friend, convincing the soldiers on the truck he was some kind of privileged person. The truck left the square as Fellini was still hugging the German officer that was getting upset as he realized he didn’t know him at all. So the young Fellini run at breathtaking speed looking for a safe place to hide, knocking at every possible door.

But no one opened except the door at number 110 of Via Margutta.

50 years later Fellini choose as his last home an apartment in that street, at that very number.

Do you want to track down Fellini’s most defying moment and see one of the most interesting inscriptions in Rome? Reserve your Sense Of The City Tour now! 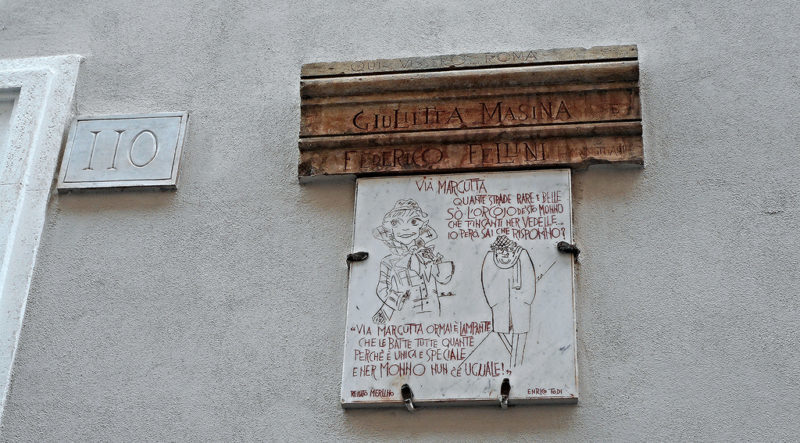 Vicolo Orbitelli: the half greek and half latin inscription

As it often happened in Rome, rich Roman families make what they want out of the ancient ruins (does the Marcello Theatre and Orsini family ring any bell to you?).

So did the Orbetelli family, who built their own house on the ruins of the Temple of Jupiter.

The very last proof of its existence is the inscription at the bottom of the building, as it’s trying to find its way through the centuries.

Among all the inscriptions in Rome, its importance is in its rarity of being half greek and half latin, marking in the marble a centennial moment of transition between the greek cultural dominion and the latin one.

The Aurelian Column: a mistake that lasted for centuries

Once you reach Montecitorio, the house of the Parlament, you can’t help but being mesmerized by the splendor the Antoninian Column: a monument dedicated to the emperor Antonino Pio, as it’s written on the inscription and as most of the Romans know.

The column is actually dedicated to another emperor, more famous: Marco Aurelio whose son, Commodo, erected it in his honor between the 180 e 192 ac.

Saving you from technical jargon, we can tell you that the similarity of some of their several names mislead a famous latinist who gave the paternity of the column to the former rather than the latter.

So, here’s the chance for you to impress your Roman friends!

The fountain of Chiesa Nuova: the prank before the gallows

You can find the Chiesa Nuova (literaly New Church) along Corso Vittorio Emanuele, the street that leads you to Saint Peter’s. New, according to the millenial Roman standards since it’s 400 years old.

That said, what interest us the most is the inscription on the fountain in front of the church, whose story itself is pretty funny: worried because the Romans used the fountain as a trashcan (come President of the Street, come!), Pope Gregory the XV in the 1622 decided to cover it with a lid that gave it the appearance of a soup tureen, to the delight of the ready-wit Romans.

What did delight them far less was the inscription that every death sentenced read on the lid passing by the fountain on their way to the gallows that said: “love God and don’t fail, do the good and let it speaks”.

A mocking warning that comes far too late.

If you wanna see it, how about stopping by on your way to the Vatican Tour or Castel Sant’Angelo Tour?

By Francesca PagliaroPosted on November 6, 2017June 12, 2022Posted in Blog, Top 5
Manage Cookie Consent
We use cookies to optimize our website and our service. We think you already know that, but please check your preferences before navigating our website, to be sure to be at ease with us :)
Manage options Manage services Manage vendors Read more about these purposes
Preferences
{title} {title} {title}