On the wings of the Angel: Castel Sant'Angelo Tour 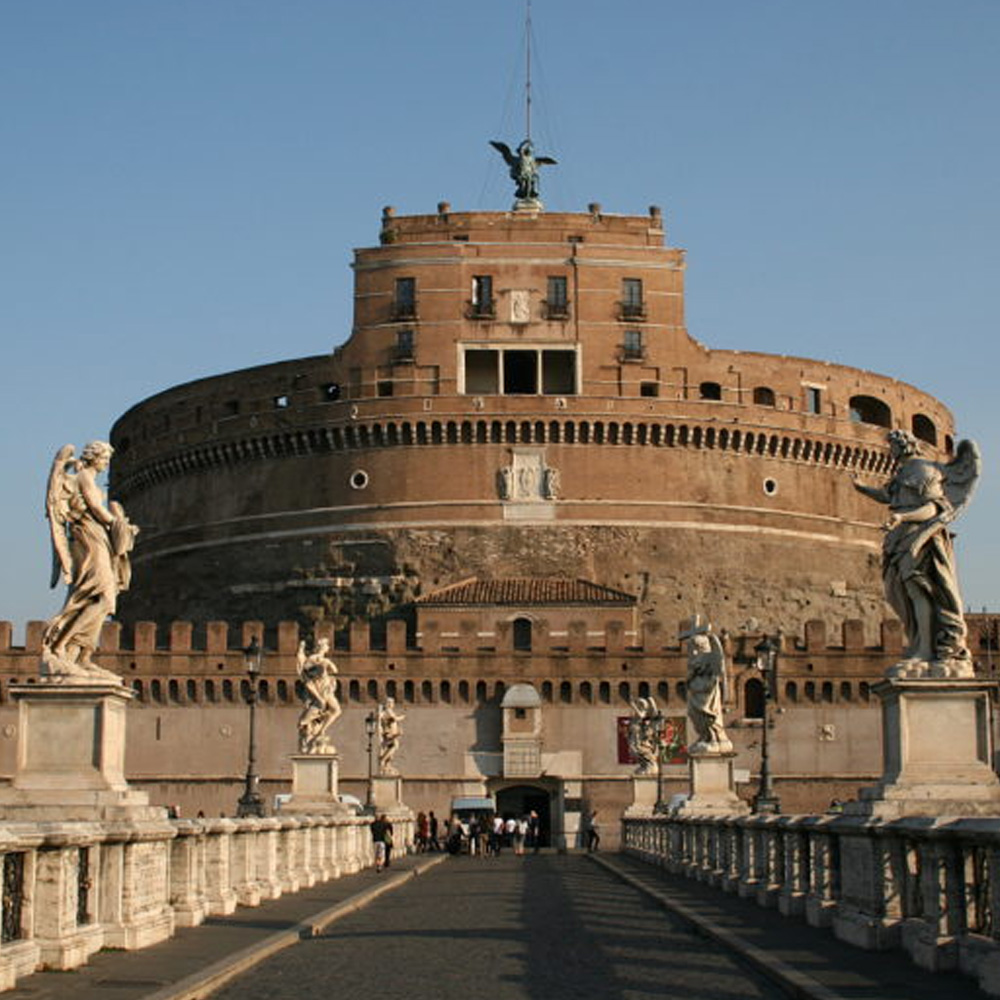 THE TOMB THAT WAS TURNED INTO A FORTRESS

You might have noticed the angel that sits atop this impressive building. Have a look from a city balcony or peek out of a window of the Vatican Museums, you will notice and recognize it: “Castel Sant’Angelo”! THE CASTLE OF THE HOLY ANGEL!

Why was this castle built? Who built it? Is this a real castle? Why “Angel”? Is that a real castle moat?! Get all the answers in this charming Castel San’Angelo tour!

Would you believe that before being turned into a castle by the popes this was …a tomb?? Follow our licensed, local guides and discover all the secrets of the tomb of Publio Elio Adriano…Hadrian the Emperor who built the wall!! Perhaps the most fascinating among the Roman emperors: philosopher, sculptor, architect, painter and…Emperor in his spare time! Hadrian chose the right bank of the river Tiber to build a mausoleum for himself and his family: our guides will captivate you with the incredibile story of his life!

FIRST A MAUSOLEUM AND THEN A FORTRESS!

In the 6th century this imposing mausoleum became a part of the Roman fortifications and was later turned into a strategic fortress by the Popes.
STRONG, HUGE, AWAY FROM THE CITY CENTER…It was soon clear that anyone taking refuge in this fortress would be safe!
From the Middle Ages onwards the castle was used as a prison; ask your local guide about the “controversial” methods used to re-educate prisoners and how the Popes complained of their unexpected resistance! Some say that their ghosts have still not abandoned the building …

…AND BACK TO POPES!

Discover the crests of the powerful families that have bought, renovated, changed and finally pillaged Castel S. Angelo up to the year 1277 when it was finally placed back into the hands of the Popes.

During Castel Sant’Angelo Tour your professional guide will enchant you with the adventurous story of the famous “Passetto”: a hanging passageway still running from the Vatican State to the Castle.
In times of danger it provided sanctuary to the Popes, helping them get quickly away from the papal apartments in case of attack! Most famously, as our guides will tell you, Pope Clemente VI holed up here during the 1527 sack of Rome!

Climb a few steps up to the terrace and enjoy an UNFORGETTABLE VIEW over Rome; you will be where Tosca, the immortal Puccini opera character, took her life!

CASTEL SANT’ANGELO TOUR: FROM A PRISON TO A PALACE!

We owe its present beauty, along with its Renaissance interiors and gorgeous paintings to the Popes. You will admire the beautiful sala Paolina and the frescoes by Raphael’s pupils…not to be missed!

A TOMB, A FORTRESS, A PRISON, A LUXURIOUS PALACE, AN OPERA SETTING, AND ONE OF THE BEST VIEWS OVER ROME…WHAT MORE COULD YOU ASK FOR?!

This tour will take you away from the crowds and carry you into the Roman age right up to the 19th century! You will learn about powerful emperors, intriguing popes, mad rushes, executions and much more!