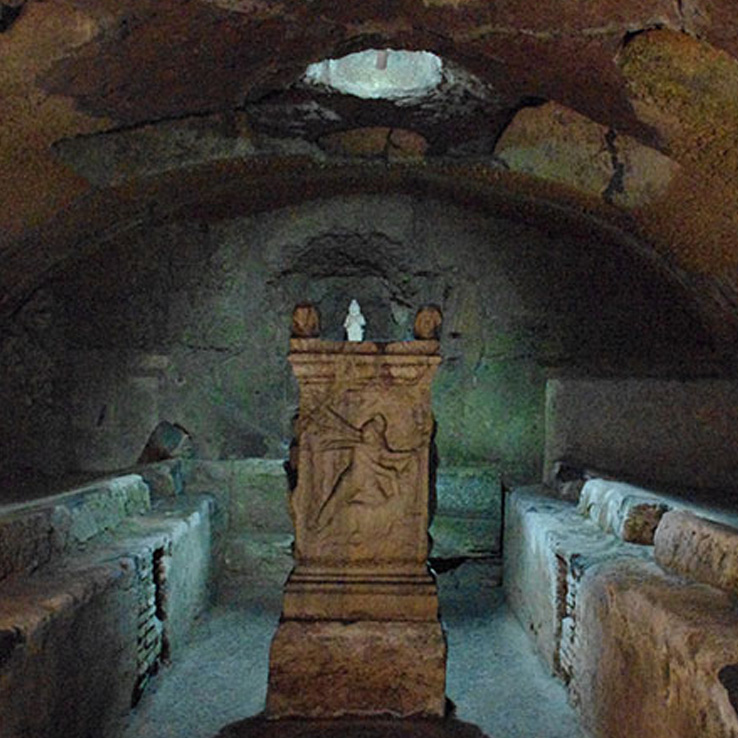 PRIVATE AND SMALL GROUPS
In the case of private tours, the starting time can be personalized.

An Underground Rome Tour could be about many things: Catacombs, Secrets Tunnels, Aqueducts and also subterranean churches and Roman houses.
Discover the many levels of Saint Clement’s Church and its Underground and walk in the ancient Coelian district to discover Roman Houses under the Church of Saint John and Paul with our licensed and local guides!

Underground Rome Tour is an incredible adventure in the belly of Rome.

It’s just like in a movie: in 1887 Father Germano, a Passionist brother, digging under the church of St. John and Paul, discovered unearthed a fascinating site.
It was made of more than twenty rooms, some of which were richly decorated with paintings dating from the third through to the twelfth centuries.

You will explore with an expert guide the sequence of decorated rooms and the maze of superimposed structures cut through by the deep foundations of the church.
These ruins will reveal aspects of Roman daily life, giving us the opportunity to discover a fascinating  blend of cultural themes. Shops, Luxurious rooms and even a thermal bath…All underground!

You are wondering what’s the connection with the church? According to tradition, this was the dwelling of John and Paul who, having suffered martyrdom by execution, were buried on the site of their own house! These Roman houses were reopened to the public on January 2002.

The next stop of our Underground Rome Tour is St. Clement Church!
We’ll walk up to the Basilica where layers of history are piled one on top of the other. Today visitors can climb down to a 4th century church, see the 2nd century remains of a Mithraic temple and then discover an incredibly well preserved 1st century Roman street and…finally, you will see the waters of an underground river flowing beneath your feet. With these ruins reaching to 57ft deep, it makes you wonder what might lie beneath the rest of Rome!

Give yourself this chance to walk off the beaten path and follow us through some of the most mysterious sites of Rome!

Entrance fees for the sites are not included in the tour guide fees.

Saint Clement’s admission to the excavations:
ADULTS €10.
STUDENTS under twenty-six years of age, with Student’s I.D.: €5.00.

CHILDREN UNDER 12 yo: free of charge.

*If  you have a party of 9 or more please concact us to arrange your private tour.

PRICES: tour guide fees must be considered as a total, not per person.

From June to October: an extra fee of 15% will be added on top of the price for every last minute request (starting from 3 days before the date requested for the tour).