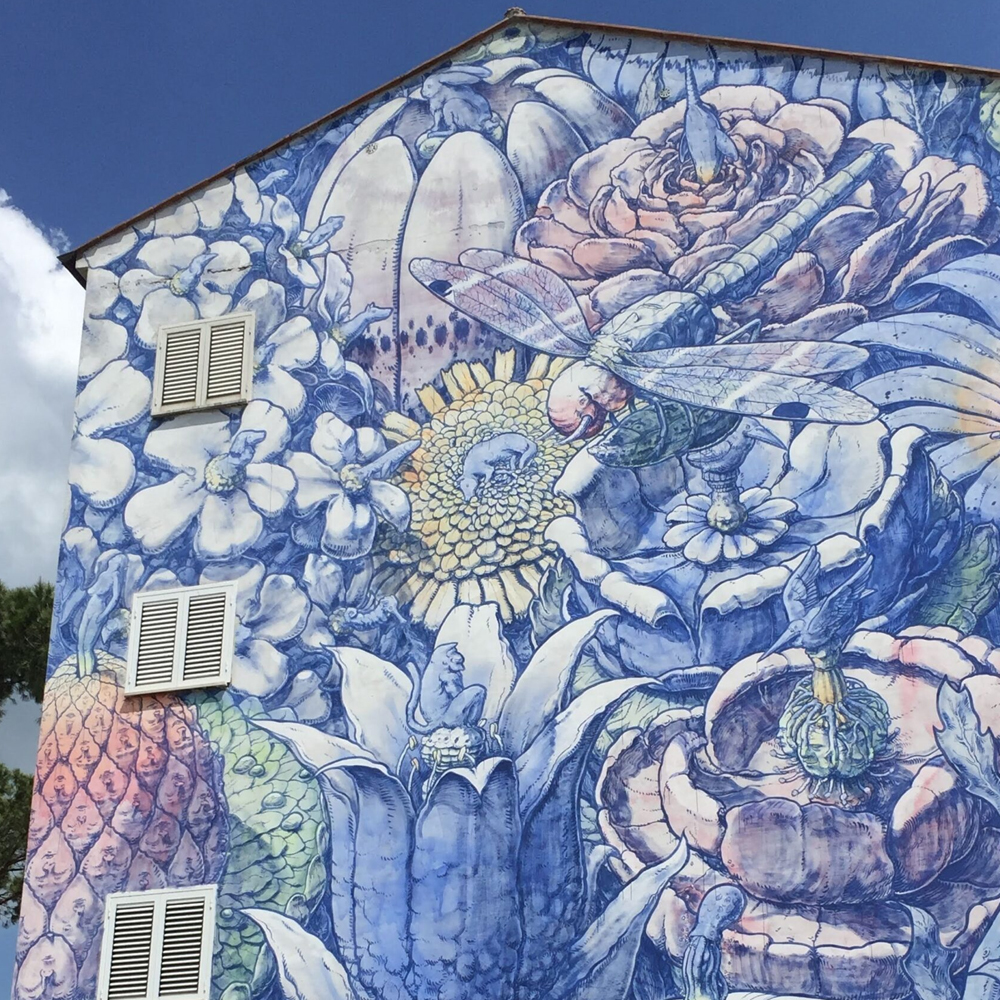 Rome is not just ancient ruins and Baroque churches: the Eternal City has recently been experiencing a boom of…STREET ART!
Urban artworks are reviving the walls in suburbs and popular districts in Rome. These art-works will give us an opportunity to explore some little known, but no less beautiful corners of this surprising city.

Rome has more than 300 works of street art in dozens of city streets.

Take our street art in Rome tour to discover the best!

Our guides will take you to little known parts of the city, unknown to the general public,  such as “Quadraro” in the south-eastern part of ​​the city, where we can enjoy the early works by David “Daivù” Vecchiato in the ​​Via dei Corneli area, Via dei Lentuli and Largo dei Quintili.
Our local guides will tell you about the “Mu.Ro” project and together we’ll explore the picturesque Ostiense area, formerly an industrial district famous for its striking gasometer (an abandoned gas container).
The Ostiense District project has enabled street artists like Blu to give new life to local buildings with a rainbow of multi-colored faces and Carlos Atoche to create -on the wall- a world of submerged statues.

These are just some of the artists that were inspired by the city’s post-industrial atmosphere and gave life to remarkable art works in the Ostiense district where, in fact, the highest concentration of street paintings is to be found in Rome.

This tour will also be an opportunity to travel through centuries and admire the famous Pyramid, a Roman tomb reminiscent of Egypt, and St. Paul’s Basilica.

As our passionate guides know very well, in Rome, art is not just in a museum but all around us!

If you want to experience Rome as Romans do, if you have had enough of the beaten path and want to know more about this city, this is the -urban- walk for you!

We will explore picturesque and less know corners and discover where the creative heart of the city beats!

On our way we might get a bite of street food, such as the famous Roman pizza to go and a supplì…tasty institutions! Not just food! And should the heat make you tired, your guide will show you where to find the best local ice cream shop…even in the suburbs!

The spots to explore are many and the choice is wide.

YOU CAN CHOOSE ONE DISCRICT BETWEEN:

1 – OSTIENSE – Near the famous Pyramid Cestia, between the streets of the busy and noisy Testaccio quarter we will meet some giants of street art! The famous work of Blu in via del Porto Fluviale, the wall of fame of Jb Rock and the optical illusion of the works of the very “technical” Sten and Lex are just some of the masterpieces that will leave you breathless.
To this day Ostiense remains the most famous of the districts enhanced by street art and is still the scene of the international OUTDOOR festival every year.

2 – QUADRARO – In 2010, thanks to the work of the artist DIAVù, the Mu.ro project took off! The team leaded by David Vecchiato has continued for years to be the protagonist of new works that animates every corner of the neighborhood.
Difficult to keep track of the walls and the artists who have come to life thanks to Mu.ro but we are talking about real celebrities: the unmissable Hulk by Ron English, the fawn by Gary Baseman, the famous Esodati of Maupal. We will explore tunnels and alleyways, private houses and public buildings by reconstructing the history of a neighborhood that struggles to conserve its memory.

3 – TORPIGNATTARA – Besides the Quadraro and Ostiense, among the “unavoidable” areas to tell the heart of street art in the city there are also Pigneto and the multiethnic Torpignattara.  Our experts will organize the walk according to your tastes, age and interest!
Besides the “quintessential” street art areas of Quadraro and Ostiense, Pigneto and the multi-ethnic Torpignattara are also inspiring neighborhoods that you will not want to miss! Thanks to the synergy between local galleries and dynamic artists like Etam Cru, Sten and Lex, the Atlas and many others, Romans can now add a new wave of contemporary art to all its archaeological and historical treasures!

Recentely quoted by the financial times as  "a fascinating diversion from the centre", Garbatella is the perfect mix for architecture fan, street art lovers and Rome's addicted in search of new obsessions 🙂

Come with us and discover these secret wonders in the suburbs!

You will love seeing the sunset on Roman aqueducts out in the suburban parks and you will be surprised to find, amongst the graffiti and street paintings, the remains of imperial mausoleums!

Rome has always been an open-air museum and art gallery. If you were struck by the grandeur of the Colosseum, hypnotized by the beauty of the Renaissance, in love with Michelangelo and Raphael at the court of the Popes, now let our passionate and knowledgeable guides lead you through the streets of art and show you who, today, is making this city artistically great again!

Want to know more about street art walking tour in Rome? Check out our blog!

Contact us to find out our available itineraries or design a tour along with us to suit your tastes and interests!

Join our virtual tour and discover street art in OSTIENSE district! Near the famous Pyramid Cestia, between the streets of the busy and noisy Testaccio quarter we will meet some giants of street art! The incredible work of Blu in via del Porto Fluviale, the wall of fame of Jb Rock and the optical illusion of the works of the very “technical” Sten and Lex are just some of the masterpieces that will leave you breathless. To this day Ostiense remains the most famous of the districts enhanced by street art and is still the scene of the international OUTDOOR festival every year. Get ready to choose your best spot on the sofa, grab a glass of wine and interact with your guide from home!