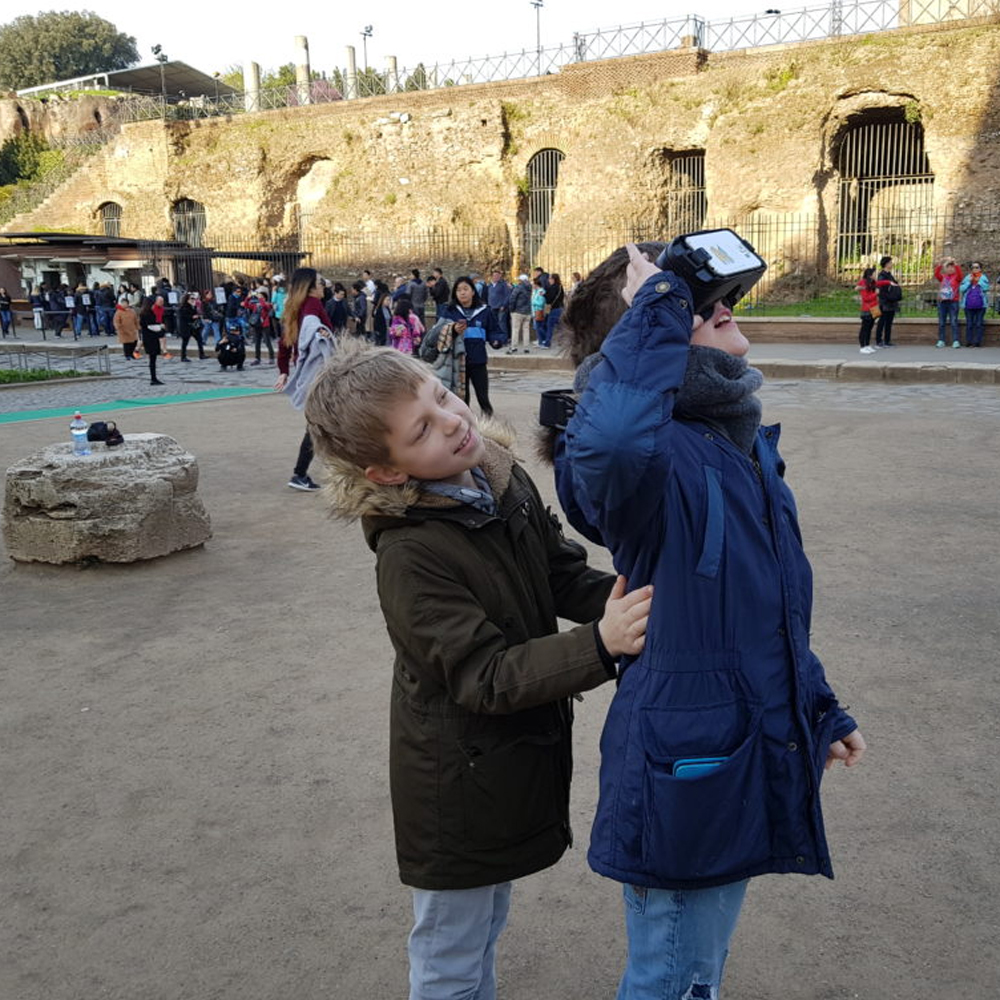 3D glasses are not allowed inside the Colosseum/Forum for security reasons.

Introduction to the Colosseum outside using goggles, enter the Colosseum and climb up to the second tier, see the Arch of Constantine and use of goggles again. Enter the ancient Roman Forum, the Holy street and the Arch of Titus then an (easy) climb of the Palatine Hill to visit the ruins of Caesars’ Palace.

PRIVATE and SMALL GROUPS (Small groups are available only at 3PM from June 1st to October 15th. On winter time: 10AM and 1.30PM)

ROME!! You’ve watched movies about it, studied it in school, read about it in books, and now you are finally here! An Ancient Rome VIRTUAL REALITY tour with GOGGLES is tailored to satisfy all your curiosity and have a complete immersion in the ancient Rome scenarios!
The virtual reality points in our tour are carefully designed and chosen for you. While you will walk on the cobble stones of the Eternal City, we will show you reconstructions and 3d pictures using glasses. The city from where, more than 2000 years ago, the fate of a huge empire was decided by charismatic and unscrupulous emperors! You will see the marbles shining, the bronze statue of the emperor Nero intact! Games and Gladiators and temples as if they were never torned down!
We studied only the most impressive and inspiring points of view to make you see the ancient city of Rome as it used to be. Follow us through more than 12 centuries of ancient Roman history reconstucted! During this ancient Rome walking virtual tour, you will literally BE there thanks to the glasses and the perfect and accurate reconstructions. You and your kids won’t believe your eyes! As you will be watching the 3d, your expert guide will describe the environment for you like being in a guided tour…Somewhere else!

What will we see in the Colosseum, Roman Forum and Palatine Hill Virtual Reality 3d Tour?

The use of the glasses is not permitted inside the archeological areas by law.

We designed a perfect itinerary for you to mix and match ancient remains and reconstructions.
After we meet, we will use the googles for the first time watching the outside of the Colosseum and the surroundings. You will move at the same time in the real space and the virtual one with the best guides always at your side. We studied the reconstructions and chose the best ones developed in collaboration with top notch archaeologists: this technological support will make your ancient Rome tour just amazing and unforgettable experience.

Next, we will enter the Colosseum like an ancient spectator, climb the stairs and reach the first tier!
You will be struck by a spectacular view of the arena and your expert, local tour guide will make history come alive again! Imagine gladiators wounded by wild lions and tigers, criminals skinned alive or fed to wild animals during cruel executions. And finally, in the afternoon, bet (not for real!) on the gladiators fighting for their life.

After the the exploration of the Flavian Amphiteatre, leave the stadium walk to the Arch of Constantine, in 5 minutes you will arrive at the beating heart of the ancient world: the Roman Forum.

Here there will be a second virtual reality stop to go deep into the Colosseum story and travel down to the Underground area to watch the cages where lions and gladiators were kept and to have the best introduction to the majesty of the Roman Forum. After watching the “piazza”of the past throught your glasses, we will be back on the real world and enter the Roman Forum for real! During tour Roman Forum Tour with the help of our licensed guides you will easily imagine sellers trading goods, politicians speaking to the crowd, judges sentencing criminals, teachers surrounded by their students. Be inspired by the beauty of the most important remains of antiquity: the Temple of Saturn, the Tabularium façade, the ancient Senate house, the Temple of Julius Cesar, the house of the Vestal Virgins and their Holy Fire. Walk through the “Via Sacra”, the holiest road in Rome, to reach the Basilica of Maxentius and Constantine and the Arch of Titus, with its picture of the glorious Jewish Menorah.

After this a very easy walk will take us to the top of the Palatine Hill, where the imposing remains of the Imperial Palace are still visible!

Don’t miss the opportunity to see the Ancient city with a different approch! Book your immersive 3D walking tour of Ancient Rome and the Colosseum!

Please note: from October to February Colosseum and Roman Forum will close at 4:30 PM.